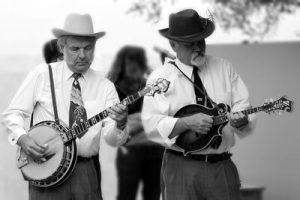 The banjo and the mandolin are two very different looking instruments, but you may be surprised to know just how many ways they are similar to one another.

The overall structure of each one, while different in regards to the specific shapes, are generally quite similar, with many of the basic parts shared between the two, such as the neck and body, the bridge and the tuning heads, and of course the strings.

Let’s dive deep into the differences and which one you should get:

Is The Banjo or Mandolin Easier To Learn?

So which instrument is easiest to learn, the banjo or the mandolin?

Much of this comes down to the style of music. Many people would tell you that they’re both fairly easy to learn compared to the guitar.

This is because they have fewer strings, which makes the written music easier to read.

The mandolin can be quite simple and easy to learn, assuming you’ve got a good teacher.

Banjo music can be easy to learn too, with the exception of certain styles, such as bluegrass which can be very difficult to learn since it is often played very quickly.

The keys to learning either instrument are to find a good instrument, find a good teacher, and make sure you’ve selected an instrument you’ll be enthusiastic to learn, because if you’re enjoying the process, learning anything is easy!

Differences Between The Banjo and Mandolin

One of the differences between the two instruments is the material that makes up the body of the instrument.

A mandolin has a hollow, wooden body, which often has two ‘f’ shaped holes carved into it to allow sound to escape through the front of the instrument.

Modern mandolins will sometimes have a plastic triangular pick guard below the strings to protect the wood from wear and scratches.

The banjo’s body is much different. It is usually constructed with a ring of wood, with a tone ring inside, a piece of plastic similar to a drum head on the front, and sometimes a bowl shaped resonator on the back.

The shapes of the bodies are usually quite different, with the banjo’s body being circular, and the mandolin’s body being more of a teardrop shape, making the two instruments very distinct from one another.

Another difference between the banjo and the mandolin is the size.

The standard banjo has a very long neck, and is similar in length to a guitar.

The mandolin, on the other hand, is a much smaller instrument, with a much shorter neck and a size closer to that of a tenor violin than to a guitar.

Of course both the banjo and the mandolin each have different versions which result in different sizes, but in terms of the standard sizing, they are quite different.

Another obvious difference between the banjo and the mandolin is the number of strings.

Most banjos these days have either four or five strings.

The mandolin usually has eight strings.

This gives each of the instruments a very distinct sound from one another.

It gives the banjo the famous twang sound, while the mandolin sounds almost like a higher pitched twelve string guitar.

This is because the strings of the mandolin are usually played in pairs tuned in unison to one another.

Which One Should You Choose?

So should you get a mandolin or a banjo?

Choosing an instrument to learn to play in general is hard but especially deciding to play the banjo or mandolin is uniquely difficult because they are so closely related.

Both instruments are extremely versatile and can play a lot of different types of music bluegrass, folk, country, jazz, etc.

The mandolin is probably a bit more versatile instrument for different types of music but the banjo is not far from it.

Before you buy a banjo or mandolin you should already know what type of music you want to play. Understanding that is the basis of knowing which one to pick.

Ultimately it comes down to how much you want to spend.

Banjos go from anywhere from $200 to several thousand dollars.

Mandolins cost about the same, maybe cheaper depending on the manufacturer.

The origins of each instrument is probably the best place to start. The banjo originated in Africa, by African slaves as long ago as the 1600’s. They were originally crafted using gourds and animal skins and bamboo.

The banjo is still commonly used in a lot of African music today, and it’s also used for many other musical styles, such as bluegrass, country, and even rock and roll music.

By contrast, the mandolin originated in Europe. Italian lutes were popular during the middle ages, and these lutes were developed into what we would now call a mandolin over several hundred years.

It was most often used in baroque music, but over the centuries it has been adopted by many other musical styles much in the same way the banjo has been, including Celtic and classical music.

The banjo and the mandolin are both used together in some types of music as well, including country, folk, and bluegrass music.

Understanding the differences between the banjo and mandolin are key to deciding which one to buy and learn from. You can always do both, pick one instrument first and then once you have learned that one go on to the next. Learn more about the banjo and ukuele.

Each of these are a great way to get into stringed instruments and will provide many fun and lasting memories as you keep learning.