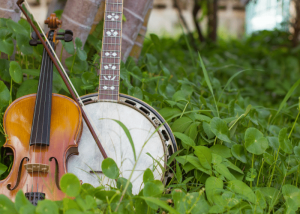 There are many instruments in the world, and when choosing one to start playing can be a little difficult. Knowing which instrument is right for you is key to mastering it.

If you cannot decide between a Banjo or a Fiddle, you will be interested in reading the following.

Differences Between The Banjo and Fiddle

The first thing we should know about the banjo and the fiddle is to which group of string instruments both belong.

The banjo belongs to the group of pulsed or dotted strings instruments. They are those instruments that reproduce a sound by vibrating the strings by pressing them or “pinching,” being able to be with the fingers (yolk or nails) or with a plectrum or pick (accessories).

In this group, we also find the guitar, the harp, the lyre, and the zither.

In the case of the fiddle, this instrument integrates the group of strings rubbed. The string is vibrated with the friction of an arc that slides over it. Seldom rubbed string instruments can also be pinched with your fingers.

This group is completed by the cello, the viola, and the double bass.

There are many different types of banjos but is a stringed instrument reminiscent of the guitar; they can have four, five, six, or ten strings. Learn more.

They have a circular structure, which is their main aesthetic feature, and a mast that is usually long. Besides, they have a patch that covers an opening. The latter gives it special acoustic conditions.

Banjos are generally used to play country music (speaking of an instrument that has few strings); however, if the strings are increased, then it can be dedicated to playing more advanced music such as Jazz or Blues.

The way to play it is through a finger tapping, with which the appropriate strings are pressed on the concrete frets that form the notes. The most common tuning is CGDA GDAE.

Compared to learning other instruments, it presents a medium-high difficulty, but with small notions, you can start to make sounds, so it is straightforward to encourage learning.

With a little discipline and dedication, in a short time, you can begin to intuit what will soon be melodies.

All fiddles are made entirely of wood. The fiddle has a fretless fretboard. Their strings are hooked to tuning pegs and to a tailpiece that passes through a bridge supported by the pressure of the strings.

The vibrations of the strings produced on the bridge are sent to the soundboard, and this amplifies the sound.

Inside the instrument, under the string bridge, embedded between the fiddle’s belly and the back, which is made of maple, is the sound post, a thin pine stick that transmits the vibrations of the strings to the end of the instrument, contributing to the tonal characteristics of the fiddle.

One peculiarity is that it has four strings and is the smallest of the string family, and thanks to this, it can make the most acute musical notes.

The fiddle has strings which are made of gut or metal, wrapped with aluminum, silver or steel, being the most popular steel, in all of the fiddles in the string “Mi” is directly made of steel wire, producing a louder sound.

Another of the relevant characteristics is the tuning of the strings; intervals of fifths tune these. In general, each string has a particular sound, which gives each musician a unique style when playing this instrument.

The fiddle is one of the most difficult instruments to learn to play. Getting to have the right tone with a fiddle is a whole process. Looking at it from the positive side, this allows us to be in constant growth and development as a musician.

This instrument has long had a solid reputation of being an instrument impossible to learn, at least unlikely in a short time, since it requires: musical training, reading the notes, reading a score, among others.

Which One Is Harder To Learn?

On the other hand, the fiddle, it is almost impossible to learn to play it alone in the correct way.

You can indeed learn to play some songs or even get incredible results for yourself, but you will not achieve the perfection that a teacher can give you.

You should finally know the differences between the banjo and fiddle, as well as which one to learn first.

The fiddle is an extremely difficult instrument to learn while the banjo is still hard but way easier than the fiddle.