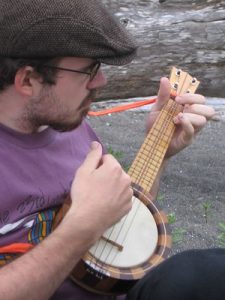 This Banjo and Banjolele comparison describes the history of each instrument, description, pricing, similarities and differences, and which one is easier to learn.

Let’s dive deeper into the details.

The Differences Between The Banjo and Banjolele

The banjo originated in Africa where it was used extensively for folk music.

Due to the slave trade in America in the seventeenth century, the instrument was introduced in the continent. The banjo is a fairly large instrument with a long neck, and drum like body.

There are usually five strings for the banjo, and plucking the strings will create music. The drum-like body will amplify the sounds.

The banjo is usually available in the resonator style, with a closed back containing a resonator to amplify the sound.

Musicians who want a cheaper banjo can opt for an open back banjo which does not have a resonator, due to which the sound produced is less loud.

Most resonator type banjos can be converted into open back banjos and vice versa.

The price of the banjo varies greatly depending on the quality of the banjo, there are inexpensive banjos for beginners available for a few hundred dollars or less, while the high quality banjos used by professional musicians cost thousands of dollars.

The Banjolele was first used by musicians in the 1900s , and George Formby made the musical instrument extremely popular in the 1930’s. The banjolele is a combination of the banjo and the ukulele. It is also called the banjo uke or banjulele.

The ukulele is a musical instrument which originated in Portugal and later became popular in Hawaii.

The ukulele is like a small guitar in design, with a short neck and fret for tuning.

The banjolele is used less popular among musicians compared to the banjo.

Compared to a full size banjo, the banjolele will be smaller in size since the neck is shorter.

Hence it will usually be lighter and less expensive than a banjo of similar quality. Many musicians are performing at different locations regularly, especially when touring.

They have to carry their instruments with them and also carry them on stage, some musicians prefer to use the banjolele since it is smaller in size, and then can easily carry the instrument while performing.

Many children wish to learn to play a musical instrument and the parents who are looking for a light weight instrument, will prefer the ukulele since it is easier for children to carry the instrument.

However the tone of the music created will differ, and this depends on the design of the musical instrument.

The musician will have to tune the instrument, adjust the settings and then check if the tone is suitable for the music which they are creating.

The banjo will usually have metal strings, while the banjolele typically has nylon strings, and this also affects the music quality.

Is The Banjo or Banjolele Easier To Learn?

The time required to learn to play the banjo or banjolele depends on the prior experience of the musician.

Musicians who have some experience in playing the ukulele, will find it easy to play the banjolele since it is very similar.

The time taken to learn to play the banjo or any other musical instrument with strings will greatly vary depending on the aptitude of the person who is playing the instrument.

Learn about the banjo and guitar.

It definitely sounds similar. One of the things you should know is that the banjolele is a ukulele but with the sound of a banjo. Obviously it’s not exact but it is a great inexpensive option to get a banjo type sound.

Also the banjo is a popular instrument in North America and the musician can choose from a wide variety of suppliers, while the banjolele is less popular. Hence there are only a few companies selling musical instruments.

The banjo is a popular musical instrument widely used for bluegrass and many other types of music.

However in some cases, the musician is told that a banjolele can be used. Hence many musicians who have not used a banjolele would like to know what a banjolele is, what the advantages and disadvantages of using the musical instrument are and we hope you now have a complete idea of what they are.